Hospitals – A historical perspective and relevance for the future

Most modern institutions have been optimised for efficiency, leading to increasing specialisation and focus on repetition. But institutions of the future are at risk of obsolescence if they rely on repetition and increasing the silo-ed approach to improve efficiency. One such institution is a “Hospital”. How did we end up with this notion of specialised centres of care specialised by organs and lost track of the person as a whole. It might be interesting to trace the evolution of hospitals via this lens.
Hospitals have evolved over the centuries rather than being buildings that have appeared near towns and cities over the last hundred years or so. So as we look back through the ages we can see how the modern day hospital evolved from humble beginnings. 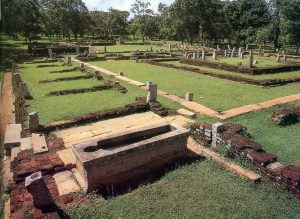 The earliest hospitals can be traced back as far as the 5th Century BC. The ancient Sinhalese are responsible for introducing the concept of hospitals to the world. According to the Mahavamsa, written in the 4th century B.C. King Pandukabhaya had lying in homes and hospitals (Sivikasotthi Sala) built in various parts of the country. This is the earliest literary evidence we have of the concept of hospitals. Sri Lanka as well as Mesopotamia had hospitals – we know this from the artefacts we have found but we don’t know too many details about the hospitals of this time. Interestingly, Baghdad had the most advanced hospital system of its time and it was called Bimaristan. “Bimaristan” is a compound of “bimar” (sick or ill) and “stan” (place). In the medieval Islamic world, the word “bimaristan” referred to a hospital establishment where the ill were welcomed, cared for and treated by qualified staff. 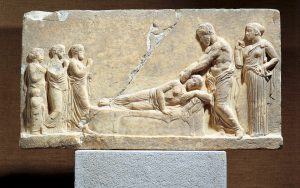 Before this the Ancient Romans and Greeks had doctors of sorts in their communities but they paid house calls rather than have a set place to deliver their care. Some sites in these communities had places where the military would be tended en masse but these were mobile and would follow them to the battlefield. The way that their belief systems worked was that it was fitting and noble to die on the battlefield so the mobile units were designed to keep people comfortable until death rather than cure them of their injuries. This was more of a transition into the afterlife than anything that resembles a modern-day hospital. 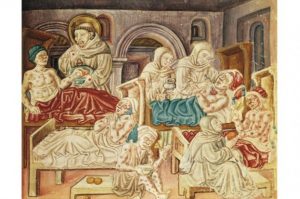 The rise of the Middle Ages is when what we might consider to be a modern hospital arose. In Europe the Christian church ruled over the people as much as the monarchs. As churches raised taxes and collected money they started to do some good for the local community with the money raised. Church infirmaries spring up in many parts of the continent across the 7th Century and beyond. Women were not considered a part of the parish in these times as both religion and church were dominated by men. To engage women better, many churches involved women to set up the infirmaries and look after the young, the elderly and the sick alongside the church. People were encouraged to embrace religion and have access to the basic medical care that these infirmaries were able to offer.
The newly built and operated infirmaries were a way for women to become a part of the church community and have acceptance. This is actually the birth of nursing. The women worked around the clock to set standards of care for their patients in their time of need. In return they were recognised and accepted by the church for the good that they did in the community. Nursing was as noble a calling then as it is now. Of course all nurses in these church infirmaries were working there on a voluntary basis.
It was during this time that the concept of philanthropy became more prominent and churches raised money to build special homes to care for lepers or plague sufferers and as such specialist hospitals were born. The nurses that attended these developed relevant skills and techniques to tend to the particular needs of their patients. Even royalty got in on the act with Emperor Charlemagne making a decree that all infirmaries in France that had fallen into decay should be restored to their former glory. Nursing was still a predominantly female (and voluntary) occupation but it was receiving more recognition from the church and the rulers of Europe.
In England the link between the monasteries and nunneries were leading providers of care for the sick and elderly. But when Henry VII dissolves the monasteries in 1540 the church stopped to support the hospitals that it had built and it became the state that took up the running, staffing and finance of these buildings. The modern hospital that we know today was starting to take shape. Many of the institutions that were effectively passed from church to state at this time in London are still operating as hospitals in the modern day. Across the rest of Europe rich families and feudal lords funded the hospitals that kept their workforce and armies (as well as their families) fit and well enough to work or fight. As a consequence the standards of care were directly related to the funds made available. 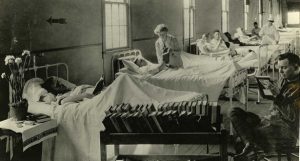 During the Age of Enlightenment of the 18th Century the progress of science and medicine made great strides and as a consequence doctors and surgeons entered hospitals to perform operations and raise the standards of care. Surgeons were joined by new group of specialists who administered an anesthetic – anaesthesiologists, so that operations could be carried out in more safety. This meant that one single institution could care for many people in one place. A range of doctors could all carry out all manner of procedures in one place, sharing expertise as they went. The times were typified by a vast increase in knowledge of all areas of life. The pioneers of the day looked at innovation and experimentation to cure their patients of the diseases that made them unwell. Hospitals were separated into wards with specialities founded to look after people that suffered from the same symptoms. 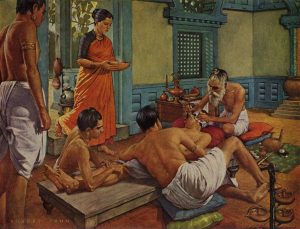 This meant that doctors were able to spend all day dealing with similar cases and develop a greater understanding of a particular area of medicine. But over a period of time, this led to patients being looked at as individual organs or body parts rather than whole human beings. There were however two systems of medicines which were deeply rooted in treating the whole person, which continued to grow over the years – the Chinese medical system and the Indian version – Ayurveda.
Modern Medicine (Allopathic) started to become more focused on dealing with the issue of only one part of the body when the best cures may have been to look at the individual as a full human system. Often the cure for one ailment in modern medicine brings about issues in other parts of the body that end further attention. Patients often end up seeing several specialists in the same hospital as a cause of only one initial admission.
What started off a home visit based system, slowly evolved through the passage of time to being a highly specialised institution based system. As we enter the new world where repetition and specialization is going to go out of favour, our hypothesis is that in 50 years from now, Hospitals will case to be the institutions that we see now, and we will revert back to the home based care of ancient times, and only highly specialized or rare cases would need a visit to an institution.