The future of work will not look like work

Early this month, one news article caught the corporate world by storm. Zappos CEO, Tony Hseih sent an internal memo to his company, which looked like the scene where Neo was asked by Morpheus in Matrix to chose the blue or the red pill.

Zappos is going to be self organised and self managed – and will accept Holacracy completely. There will no managers, the company will immerse itself in the concept of Holacracy.
In essense Tony said “Accept Holacracy or leave.”

Zappos has set a very high bar on customer service and is rock-star example of how to build customer focused companies. Can it disrupt the very concept of a company or work?
I have been fascinated with the future of work since i chanced upon Free Agent Nation by Daniel Pink. If you haven’t read it, here is a review by a reader which summarizes my excitement about the book

Pink demonstrates that free agents are a large and growing share of the work force. He describes some of the economic forces contributing to this phenomenon, but he finds that free agents themselves explain their reasons for leaving the corporate world in psychological terms: a desire for freedom, authenticity, accountability, and flexible concepts of success.
Pink shows that free agents have their own unique perspectives and solutions to such challenges as security, workplace relationships, career advancement, and work-family balance. For example, he describes the way that peer networks are providing the type of career support that formerly came from within large corporations.

And this discussion about how we organize ourselves differently in the new world is a routine part of our work at Ashoka. Ashoka, the world’s largest network of social enterprises is deeply interested in this as it has wide implications on how social enterprises will organize themselves to create framework change.
Bill Drayton, founder of Ashoka, wrote about the Team of Teams in Stanford Social Innovation Review

A team is not a team unless everyone is an initiatory player, and in this world you cannot afford to have anyone on your team who is not a changemaker. Yes, there is still repetition (although automation, artificial intelligence, and the World Wide Web are fast shrinking its scope); but you cannot afford to have anyone without the skills to spot and help develop change opportunities. That is where the value lies.
This world requires a new paradigm for growing up and therefore also for education. Just as 50 to 100 years ago society took the radical step of saying that every person must master written language, now we must insist that every person have the social skills necessary to be an effective, confident changemaker before age 21. These core skills are empathy, teamwork, a new type of leadership (leading teams of teams where everyone is a powerful changemaker), and changemaking. (Ashoka’s global collaborative entrepreneurship teams for “Every Child Must Master Empathy” and “Youth Venture” are focused precisely here.)

So given that the future of work looks like there will be fewer manager and organisations will function as team of teams, the question that all of us ask is – does this work? And there is no better example than Semco where Ricardo Semler has been doing this for years. With great success.

And there are many others – Morning Star, WL Gore, Medium, Automattic…
What this new structure does is, to allow everyone to do, what Henry De Sio calls – “Step into your BIGness“. Everyone is contributing, everyone is changemaking. And as Henry states

The strategic landscape, for centuries characterized by efficiency and repetition, is now defined by change and innovation. Society is tearing down its system of silos and hierarchy. Advances in technology have also lowered barriers to individual participation. In this new game, everyone plays; everyone is bigger. The result is that our one-leader-at-a-time past has given way to a new, everyone-a-leader world. These are polar opposite games requiring very different approaches and an entirely new framework for playing.

And in this new structure, your team becomes more important than ever. And so do teams outside your organisation, which is articulated nicely in this recent post on Forbes by Ashoka and Boehringer Ingelheim

A Team-of-Teams approach is important not only within, but also between, organizations. Organizations are trying to do what they know best in their respective silos, only to realize that they are not achieving the impact they wanted to see fast enough. There is a need to test a different approach, and the Team-of-Teams way of working has emerged, quite naturally, as a coping strategy.

At Ashoka we hosted Frederick Laloux who has written a phenomenal book called – Reinventing Organisations.

‘Can we create organisations free of the pathologies that show up all too often in the workplace? Free of politics, bureaucracy, and infighting; free of stress and burnout; free of resignation, resentment and apathy; free of posturing at the top and the 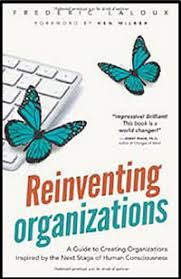 drudgery at the bottom? Is it possible to reinvent organisations, to devise a new model that makes work productive, fulfilling and meaningful? Can we create soulful workplaces – schools, hospitals, businesses and non-profits – where our talent can bloom and our callings can be honored?’
Frederic Laloux asks these questions in his book Reinventing Organisations. The answers, he suggests, are to be found partly in our history, which tells us that ‘with every stage of human consciousness also came a breakthrough in our ability to collaborate, bringing about a new organisational model’.

Given this profound change happening around all of us, how do we think of careers and employment in the future?
My take is that in the ideal workplace of the future, there will be no “workplace”or “employers” Teams of teams will self assemble based on need and co-create and then disassemble to form other teams of teams. Each decision to be part of the team will be defined by four factors.
– Learning opportunity for me as an individual – Will i learn something new?
– Mission of the organisation – how am i aligned to it – Is this something which will inspire me?
– Sense of belonging with my co-workers – Will i like working with this team?
– Will it help me grow? – Does this fit with my definition of overall growth as a person
Some of the best known organisations who retain people the longest are not the best paymasters. But they create an environment where people are valued, learning is encouraged, everyone believes in the mission of the organisation and people look out for each other.
Our challenge really is to build structures which accommodate these needs. In a world where meaning is becoming more important than money, this is both a challenge and an opportunity.