Healthy Behaviour – Is our biggest problem the way we communicate? 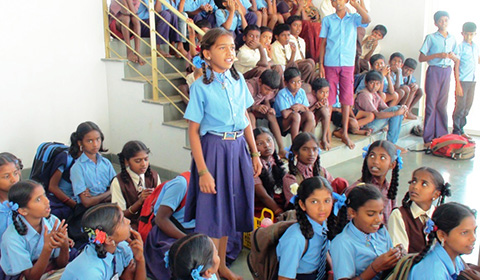 This post is part of a series on The Healthcare Gamechangers. Read all the stories in this series here.

The story of Nalini Saligram and Arogya World

Healthcare has been developing along one line for centuries. We look to help people far too late in the process to have any meaningful intervention. Once someone presents with type 2 diabetes, for example, then the horse has already bolted. Not only are all attempts from then on about managing a disease rather than curing it, but the time and money needed to do this by far outweigh  earlier intervention. It would test the skill of any doctor to not only perform an operation or prescribe the right treatment, but also motivate people to do the right things. This is actually one of the key elements in changing behaviors. I believe that there are two strands to this,

Medicine is almost completely focused on the telling part. We tell people to stop smoking. We tell people to lose weight. We tell people to get more exercise. We tell people to cut down on alcohol, sugar, salt and many other things. But we don’t sell often enough. Once again, we see an area of healthcare that doesn’t perform in the optimal way. People may understand all the ‘tell’ arguments you give them, but without the ‘sell’ motivation to do anything, you are wasting your breath.

We have also seen how moving the care away from the daunting and centralized hospital into the community has a big impact on the consumption of healthcare. So why do we insist on excluding people from the conversation?

Communication is vital to reach people earlier in the cycle of wellness. But without the right techniques to reach people, these attempts will not be as effective as they can. Just communicating with people in their own environment is a step in the right direction, but this needs to be effective communication to make the kind of sea change that is required.

Diabetes is a problem across the country of India, where there are more than a billion people and little access to healthcare education. Add into the mix the poverty that is rife in many parts of the country and you have a problem that is bubbling up for the near future. And it isn’t just the poorer people that are facing issues. The growing middle class in the country are working longer hours and consuming an ever-poorer diet. Conditions like type 2 diabetes and heart disease are affecting the people of India in bigger numbers each year.

An estimated 20 per cent of Indians have at least one chronic condition. 69 plus million Indians live with diabetes, 77 million are said to have pre-diabetes and the number of diabetics is expected to pass 100 million by 2030.  One million die from diabetes each year in India.

Fortunately diabetes is preventable – according to the World Health Organization, 80% of diabetes, 80% heart disease and 40% cancers are preventable with 3 lifestyle changes: avoid tobacco, eat right, and increase physical activity.  Now Nalini Saligram could have looked at this as a tell situation. She could have used her background to tell people all the right things that they should be doing. She could have told women that their families’ habits had to change. But this would have fallen on deaf ears because people are resistant to being told what to do.  Behavior change is the holy grail of diabetes prevention – it is very difficult to do.

So, she looked for a different approach.

She looked at a multi-pronged community approach, taking prevention to where people live and learn and work.

Arogya World’s Healthy Schools program targets adolescents ages 11 to 14.  The comprehensive two-year program includes classroom and school-based activities, as well as outreach in students’ homes and communities. Each year compelling age-appropriate games and learning activities are implemented by trained student leaders or peers. The program’s effectiveness is measured through pre- and post-intervention comparisons of the students’ self-reported knowledge, attitudes and behaviors.  Data reported during the first two years of the pilot program (n=2,263) showed an increase in the daily intake of vegetables from 61.2% to 76.9%, 23.7% more students understood that unhealthy eating habits can put you at risk for diabetes, and 66.8% v. 48.9% of students reported that being physically inactive can put one at risk for diabetes. Overall impact on improved health behaviors from the pilot program was estimated to be 14%.  Nalini and the Arogya team are now scaling up this program to reach hundreds of thousands of urban and rural school children in partnership with many organizations including Agastya International Foundation and Ashoka’s Nourishing Schools program.

The easiest place to connect with people who are open to ideas and forming their opinions about the world is in schools.  Reaching children before their lifestyle habits are set, Nalini believes is smart.  But for those that had already passed though the school system, Nalini had to find a different approach. Dragging people back to the classroom was never going to work. Instead she met them in their workplace.

Arogya World targets workplaces for chronic disease prevention because work is where so many people spend a large part of their day. India is a young county with 2/3rds of population under 35 years and the “population pyramid is expected to bulge across the 15-64 age bracket over the next decade, increasing the working age population from approximately 761 million to 869 million during 2011-2020.” [FICCI, EY, 2014].  Many of these employees have  sedentary jobs with long, unpredictable hours compounded by long commutes and stress.   Arogya World is building an ecosystem of companies in India interested in employee health and wellness.

However the twist is in the way this is accomplished:

Positive news, recognition and encouragement are prime drivers of behavior change, as important as avoidance of pain and suffering. Nalini understands this very well and is pushing the envelope with her “Healthy Workplaces Awards”

Each year in advance of World Diabetes Day, Arogya World holds an annual conference and award event that discusses key issues in workplace health followed by an award ceremony that recognizes the companies for their championship of workplace health. Now in its fifth year, this program and awards attracts the best and biggest employers in India to apply, benchmark  themselves and follow through on their commitments to make their environments and their employees’ lifestyle healthier.

The robust criteria that mark a company as healthy were co-created with industry in 2012 to ensure they are viable in the real world: http://arogyaworld.org/healthy-workplaces-criteria/.  And these are used by Arogya World in a direct and transparent in-person Assessment process to select the Healthy Workplaces – some 100 companies large and small, spanning >2 million employees in multiple industries in the public and private sectors.

Nalini Saligram thought about the message she wanted to deliver. It had to be engaging and work in a different way to what had gone before. People across the world brush against healthcare advice but don’t pick it up. They sort of understand a little of what is required but don’t pull
it together in the form of lifestyle changes. Nalini and Arogya World spoke to people in a ‘sell’ way that made them understand the importance of eating right, but also motivated people to actually go out there and do it. Nalini knows where she is going and has shown proof of concept.  To scale up she is looking to make her programs sustainable, work with large partners and expand her community-based approach to prevention in other geographies.  We hope she is successful as India’s next generation needs programs like this to stay healthy.

The world of healthcare needs to follow this model. It has many of the elements that we look at in this series on Healthcare Gamechangers

This post is part of a series on The Healthcare Gamechangers. Read all the stories in this series here.

If you liked this post, you might be interested in my other posts: The Healthcare Gamechangers, Hospitals, a historical perspective and relevance for the future, You are not the Unicorn, You are Awesome, Shoot me if I ever say these things to a startup team, The Doctor is NOT in, the Doctor will see you NOW, and Davos Learnings for my Daugther.

Ashwin Naik is an entrepreneur with interest in affordable healthcare, social enterprise and healthcare technology. You can also visit his blog to read more.

Ashwin has been recognized as a Economic Times Leaders under 40, Young Global Leader By World Economic Forum, Young Leader by Asia Society, Senior Ashoka Fellow & as a Ted Fellow.